Speak at OSCON 2020, One of the Largest Open Source Conferences in the World

As you may know, OSCon is one of the largest Open Source Conferences in the world.

If you have a great Open Source project to present to the world, this may be a good opportunity to not only present it to an interested audience, but also talk with other developers that may want to join your project.

Read this article to learn how to send a proposal to you can become a speaker in OSCON 2020 edition.

Why Speaking at Open Source Conferences is Important To You?

My Experience Participating in OSCON 2001 as Attendee

My Participation in OSCON 2001 as a Speaker

Why Speaking at Open Source Conferences is Important To You?

The best way to learn is to be a part of community of common interests. Large communities such as the Open Source are made of people that are experts in many areas about topics of your interest, not only your favorite programming language, but also databases, operating systems, frameworks, tools, etc..

You have so much to learn not only about the technlogies, but also people in general.

Sometimes people want to collaborate. That is a good thing because collaborators make your work so much better by helping you learn important technologies, fixing bugs, encouraging your to create your own projects, organize user groups and local events.

You can attend OSCON 2020 as somebody that goes to the talks but being a speaker is so much better that it is hard to express in a few words.

The best thing that can happen to you is when you expose your own projects and you are subject to criticism. At first sight criticism may seem bad, but fair criticism helps you to see how you can improve your work in ways that you may never have imagined before.

My Experience Participating in OSCON 2001 as Attendee

In 2001 I had the privilege to participate in OSCON event as a speaker that took place in San Diego, California United States. I did not take pictures of myself, but I kept the backpack and several handbooks with the slides of several presentations that I attended, including the presentation that I gave, as you may see below. 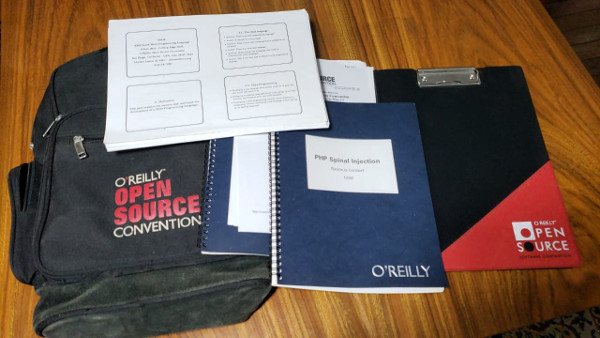 The best thing about these events was to meet in person many well known developers of the PHP community, like the PHP  creator Rasmus Lerdorf, Zeev Suraski and Andi Gutmans from Zend, and many others. We attended their talks and even had dinner together.

My Participation in OSCON 2001 as a Speaker

My experience as a speaker was even better. I was very eager to give a presentation about an Open Source project that I developed for my own purposes named MetaL. That is basically a project that generates code in any supported target language like PHP, based in a meta-language also named MetaL which has a XML syntax.

Later this project gave origin to another Open Source project named MetaStorage, which is basically  a tool to generate ORM classes to store and retrieve objects in SQL databases using a very simple XML based language that defines all the classes of objects.

Nowadays over 50% of the code that runs the PHP Classes site is generated using MetaStorage, which means that there is a great gain of productivity every time I need to implement a new feature or improve an existing feature of the site.

The feedback on my session was quite useful. Very relevant questions not only about the MetaL project, but also about my attitude as a speaker. I did not have had much experience as a speaker, so I learned valuable lessons for life.

As a consequence of my participation in OSCON 2001, I was also invited to talk at PHP Conference 2001 that took place near Frankfurt in Berlin. Again that was great to meet many other PHP developers that were active at the time, like Lukas Smith, Derick Rethans, Björn Schotte, just to mention a few that I remember.

Later I stopped going so much to conferences, more because I do not like to travel so much due to the distances and long flights that are very tiring, but I also helped to organize and speak at conferences in Brazil.

Still I would like to encourage you to go to all these conferences as much as possible, especially when you are young as you have much more opportunities to learn from very reputed developers that contribute to the PHP project and many other relevant Open Source projects.

For all the reasons above I recommend that you also participate in OSCON 2020, if not as a speaker, at least to attend great presentations and meet other members of the community.

I am planning to apply to participate as a speaker, so maybe we will meet you there.

If you would like to apply and propose a talk you may go here. In this event you may apply to give talks on 5 main topic areas. Pick one that fits better the work you are doing as an Open Source developer:

If you would like us to help you to share about an Open Source project that you are working on, please contact us, so we can also give space to you in the PHP Classes site blog, as when somebody posts an article in this site, over 150.000 developers are notified by email, so they may come and learn more about the project, and eventually some may start collaborating with you in that project.

No comments were submitted yet.